The Tasik Subsea designed and Owned ‘Southern Star’ was conceived ‘inside out’ with the first priority given to the ease and efficient deployment and operation of its key subsea operations equipment of SAT and AIR diving systems and ROVs, and the well-being of operators and crew. Only then was a hull designed to ‘fit’ the ‘inside’ layout.

The result has been a vessel, delivered in June 2017, that has proved an ergonomic dream in operation, appreciated by crew and her charterer, who operate the ship on a five year plus options, bareboat charter.

John Giddens, the CEO of Tasik Subsea, said:
‘We are obviously delighted to receive such a prestigious award and for the ‘Southern Star’ to be recognised as a major, innovative step forward in the design of dive support vessels.

‘The concept for the Southern Star was many years in the making and the product of amalgamated experience with previous vessels that has enabled us to produce a vessel with excellent ergonomics for the people that are operating it and living onboard.

‘The ‘Southern Star’ is designed from the inside out, not the outside in. Rather than take an off the shelf hull design, we started with design of the subsea operating systems and equipment and laid it out in a manner that works for the people who have to operate the vessel. Having done that, we then had a naval architect, Focal Marine, design the hull around it.

‘The result is an ergonomically designed vessel with well thought through and easy to operate subsea intervention equipment.

‘In today’s market, cost is everything. From the outset of the design of ‘Southern Star’ we aimed to deliver a vessel at a price that the customer can make money.’ 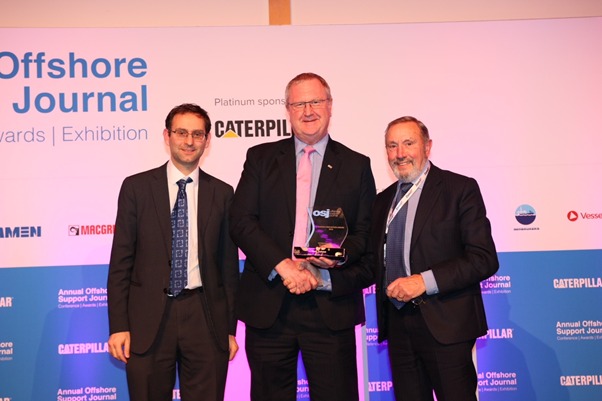 The result was announced at the Annual Offshore Support Journal Awards last night (8th Feb 2018) in West London at the Gala Dinner at the end of the largest annual international conference for the offshore support vessel industry.

Mike Meade, one of the concept developers and a Director of Tasik Subsea, collected the award and said the genesis of Southern Star dates back to 2005 when he and John Giddens installed a ‘clip on’ Saturation Diving System onto a vessel many people will know as the ‘Carlisle.’

Mike explained: ‘We further designed and built the first SAT DSV in Asia, the Ullswater.

‘By wrapping a vessel around our innovative but tried and tested subsea systems we have built the ‘Southern Star’. It is the first IACS Classed DSV for export built in China (at Fujian Mawei Shipyard), and at a price our client can operate competitively in disruptive times.’