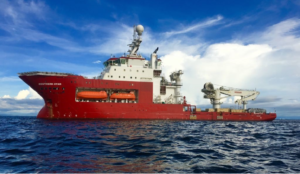 The vessel went on hire to Shelf Subsea Solutions Pte Ltd on the first of this month and sailed from Johor on Sunday 5th May, to the Malaysian oil major Petronas Carigali Sdn Bhd’s field, after loading project cargo and ROVs.

The two year old Southern Star was selected for the project because of its DP3 Dynamic positioning systems, 300msw Saturation diving system and 150 tonne SWL active heave compensated subsea crane, which will all be deployed in the installation of subsea equipment and flowlines from hub drive systems the charterer has installed onboard. The vessel will operate in DP3 mode during the installation, and will deploy both saturation and air divers along with ROVs during execution of the work.

The planned shutdown activities and flowline installations are scheduled to take a number of weeks, and will be followed by a programme of other scheduled projects.

The new charter follows the surprising return of the vessel to its owners by previous charterers Fugro, some 22 months into a six year contract.

The vessel had been almost continuously employed by Fugro on some 11 projects in DP3 mode, in Australia, New Zealand and Malaysia during its charter.

John Giddens, CEO of the vessel owners, Tasik Subsea, said: ‘We were shocked and saddened at the state of our almost new vessel when it was handed back by Fugro. The efforts by our staff, new charterer and trusted contractors to return it to peak condition in such a short time have been outstanding.

’Our vessel has a number of exciting new projects on the horizon from blue-chip clients looking to charter a ship that embodies the outstanding qualities of the Southern Star.

‘Sadly, we were left with little choice this week but to issue a Notice of Defamation demanding an unreserved retraction of the statement that Fugro issued about the Southern Star, which was clearly made to support its efforts to wriggle out of its six year long bare boat charter for purely commercial reasons.’